To share your memory on the wall of George Zirm, sign in using one of the following options:

Print
George “Butch” Zirm was born Feb. 1, 1941, in Cleveland, to George and Myrtle Zirm, and passed away from injuries sustained from a fall Sept. 29, 2020.
George’s love and priorities were family, country, animals and sports. George loved... Read More
George “Butch” Zirm was born Feb. 1, 1941, in Cleveland, to George and Myrtle Zirm, and passed away from injuries sustained from a fall Sept. 29, 2020.
George’s love and priorities were family, country, animals and sports. George loved all sports, and as a youth played on the Junior Barons Hockey Team. His love for golf began at thirteen when he started caddying at Manakiki Golf Course. While caddying at one of the tournaments there, he had the privilege of caddying for golf legend Sam Sneed. He also would tell about having met Bob Hope one time while Bob was in town golfing at Manakiki.
When George was 16, his family moved from Cleveland to Willowick where he graduated from Eastlake North High School in 1959. He attended one year at Fenn College before going to work with his father at Moto Truck in Cleveland. In 1966, he left Moto Truck to become a press operator at Lincoln Electric Company in Euclid. He finished his career there working in the Engineering Department. He retired from Lincoln in 1999, after 33 years of service. Also, from 1963 to 1969, he served in the U.S. Army Reserve.
George’s love of golf continued throughout his life. He was a member of the championship golf team while at Eastlake North High. In 1964, he joined the Cleveland Metropolitan Golf Association and was a member for many years. He acquired many trophies while golfing with the CMGA in tournaments all over Ohio. While employed at Lincoln Electric, George was a member of their Thursday Night and Saturday Morning Golf Leagues. He also played a few summers on a softball league at Lincoln Electric. After retiring and moving to Madison, he worked for 20 years as a volunteer on Saturday mornings at Erie Shores Golf Course
George also loved fishing. He and his family spent many summers and long-weekend holidays vacationing at the West Arm Lodge in Canada. Not only did George enjoy participating in sports, he also loved to watch all the Cleveland Sports Teams. George loved the Cleveland sports teams, but especially his Cleveland Browns. He had season tickets to the Cleveland Browns Football Team (which have been in the family since 1937 when The Browns were known as the Cleveland Rams), and enjoyed attending home games with his Uncle Al and Aunt Opal and his son Scott. On occasion, he would also take his daughter Christine or his grandsons Justin and Nathan. He was excited to be in attendance with his son Scott at the Cleveland Monsters Hockey Championship game in 2016.
George passed on his love of sports to his daughter, Christine and his son, Scott. Though he enjoyed watching as Christine played softball and volleyball and Scott played softball, football and wrestled, he would also help coach on some of the teams that Christine and Scott played on during their younger years. He was proud of their accomplishments in sports as Christine received the Chief Yahoo award from the Cleveland Indians in her senior year of high school as “The Outstanding Softball Player in the Private School League,” (playing on the Andrews School for Girls softball team), and Scott took third place at the State Wrestling Tournament in his senior year while wrestling at St. Joseph’s in Cleveland. He was also on St. Joe’s football team in 1989, when they won the State Championship. George also enjoyed watching his two grandsons, Justin and Nathan, as they participated in wrestling, baseball, soccer and football.
George is survived by his wife of 56 years, Patricia (nee Heth); daughter, Christine (Mitch) Gearhardt; son, Scott (Kristie Davis) and (her two children, Jim and Hannah Rexrode); two grandsons, Justin and Nathan Gearhardt; sisters-in-law, Carol (Phillips) Zirm, Patricia (Zakrajsek) Heth, and Beth (Gockel) Heth; nephews, William (Jennifer) Zirm and their two sons, Jacob and Nicholas; Joe Heth, Richard (Tracie) Heth and sons, Caleb, Parker, Jacob and daughters, Angelica and Amelia; Steve Simmons and his daughter, Tia; Michael (Bonnie ) Simmons; nieces, Kim (Kinter Zirm) Kidd and her two sons, Shawn and Nathan; Kelly (Simmons) (Mike) Richards and their son, Heath (Natalie) and their son, Jake; Cheryl Heth and her son, Drake; and Teresa (Michael) Keating and their children, Brenden, Taylor, A J, and Sean.
George was preceded in death by his parents, George and Myrtle Zirm; only brother, William Zirm; father-in-law, Clinton (Zip) Heth; mother-in-law, Maxine Heth; and three brothers-in-law, Lawrence Heth, Paul Heth, and Herbert Heth.
Family will receive friends from 2 to 6 p.m. Sunday at McMahon-Coyne-Vitantonio Funeral Home, 6330 Center St. (Route 615, north of Route 2), in Mentor, with a Celebration of Life service at 5:30 p.m. Graveside services and burial will be 11:15 p.m. Monday at Old Unionville Cemetery (Alexander Harper Cemetery), 2070 Countyline Road (S.E. corner of Route 84 and Countyline Road), in Harpersfield Township.
In lieu of flowers, the family suggests mailing donations to The Dementia Society of America, PO Box 600, Doylestown, PA 18901 or online at www.dementiasociety.org.
To leave condolences for the family, visit www.MCVfuneralhomes.com.
Read Less

To send flowers to the family or plant a tree in memory of George William Zirm, please visit our Heartfelt Sympathies Store.

We encourage you to share your most beloved memories of George here, so that the family and other loved ones can always see it. You can upload cherished photographs, or share your favorite stories, and can even comment on those shared by others.

Posted Oct 04, 2020 at 10:37am
Great man and certainly a loss to those that loved him. I knew George as a solid production worker who we asked to come into our Methods Engineering group to help us deliver and resolve tooling challenges to the shop. At first it seemed a bit of a reach but it took no time to find that these concerns were needless. George tackled the role with vigor and not only delivered the tooling on time, meeting all expectations, he worked with the production team to insure that it was used effectively and efficiently. He enlisted the knowledge of everyone around him to go above and beyond in every interaction. I never heard a single complaint from any of his efforts and frequently was thanked for having sent such a compassionate and capable associate to assist. Many great memories. Rick Anderson
Comment Share
Share via:
TZ

Posted Oct 01, 2020 at 12:46pm
Our love, condolences and prayers go out to the Zirm Family. May George be at peace in God's hands. With love 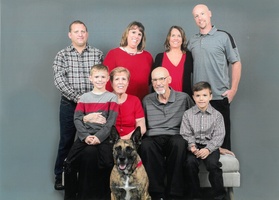